Should We Mediate Restraining Orders?

If the parties come to mediation with a restraining order already in place (with an exception included for being together in mediation), is it appropriate to mediate the issue of terminating or continuing the restraining order? Or should this be considered a non-negotiable issue for the parties to deal with only at court? This article addresses my struggle to resolve this dilemma, based on a recent case I had. I hope you will share your thoughts and recommendations on this subject, which can be included in a follow-up article.

Recently, I have been mediating more cases in which the parties already have a temporary or permanent restraining order. In California, where I practice as a professional family mediator, “temporary” means three weeks, after which there is a hearing on whether to make it permanent.  “Permanent” usually means three years. However, even a permanent restraining order may be terminated at the request of the victim who it was made to protect if the court agrees.

My approach up to now has been to keep the restraining order off the table as an issue in mediation.  After I screen for appropriateness to sit together in the same room, or to be in separate rooms, or to be on a conference call, I have found that couples with these restraining orders have been able to reach reasonable agreements, which helped bring peace to their families and resolution to their divorces. But I have told them that whether the restraining order should be terminated or continue in place is a subject they should only discuss with separate lawyers and the judge at court. I have refused to discuss that issue with them.

However, most of my cases with restraining orders have had lawyers involved, although they usually do not come to the mediation sessions. Now, I am starting to get cases with no lawyers involved for either party. I believe this is becoming much more common nationwide. 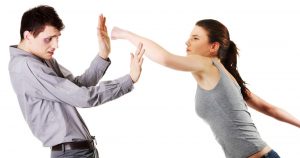 In a recent case, it was undisputed that they had started talking about divorce and neither agreed to move out of the family residence. At some point, the wife socked the husband in the face, giving him a noticeable bruise. He said he was truly fearful that she would do this again if he didn’t get a restraining order requiring her to leave. So, he did. Before he went to court representing himself, he called our mediation center and asked if we could mediate their divorce if they had a restraining order in effect. Our staff told him that there would need to be an exception for them to meet together in mediation, which needed to be written into the restraining order, and that they would each separately need to attend a pre-mediation meeting with the mediator to determine appropriateness for mediation. The temporary order included this exception, hand-written by the judge. We have done this before and it has worked well.

Before the first mediation session, I met with them each separately and determined that they were both motivated to stay calm, did not have a history of domestic violence other than this incident, and that they were generally in agreement on most issues. During the first joint mediation session, the husband proposed that he get the house and buy out the wife, who could not afford to keep it herself. Wife said she would only agree to this if he would dismiss the restraining order. I said that’s not up for discussion here and that I have a policy against negotiating restraining orders so that mediation is not seen as a place to bully victims out of protective orders.

But the husband immediately said that he was going to propose dismissing the restraining order, as part of their agreement, if she would agree to move out, stay away from the house and let him change the locks. He said that she seemed sincere in her willingness (now) to move forward with the divorce and to move out of the house. This was quite different from when, three weeks earlier, neither would agree to leave the house. But she had done some research and it was clear (now) that she could not buy him out of the house, but that he could buy her out, because of some separate property he had.

But, the wife refused to negotiate anything unless he dismissed the restraining order. He seemed satisfied that she was much calmer now and accepting both the reality of the divorce and the reality that she could not afford to keep the house herself. They both agreed that there was no history of domestic violence other than this incident. This seemed to me to be “separation-instigated violence” which is one of four basic types of domestic violence and a type that is less likely to re-occur after separation. He seemed eager to dismiss the restraining order so that they could both move on with their lives, and so that they could easily communicate about their children, who were young adults still living in the house. In my experience and judgment, there did not appear to be an ongoing threat of her assaulting the husband again.

So, I decided to assist them in writing up an Agreement that included his dismissal of the temporary restraining order. Their agreement included rules for her to stay away from the house, except for moving her furniture and personal items out at mutually agreeable times, and arrangements for her to pick up their children at any time in front of the house, and at agreeable times inside the house. 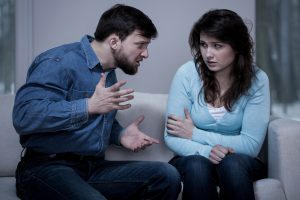 I am interested in hearing what other APFM mediators think on this ethical issue:

I look forward to reading and publishing your thoughts. Please send them to me at [email protected].

Bill Eddy, L.C.S.W., J.D., has been mediating family disputes since 1979. He is a therapist, a lawyer and the Senior Family Mediator at the National Conflict Resolution Center in San Diego, and he is a Founding Board Member of the Academy of Professional Family Mediators. As President of the High Conflict Institute, he provides training in managing and mediating high conflict disputes. He is the author of several books, including High Conflict People in Legal Disputes.