In 1962, Neil Sedaka crooned, “Breaking Up is Hard to Do.” It has not become any easier.  Surely, Sedaka was alluding to the angst that accompanies the breakup of a relationship.  Divorce is, of course, the ultimate breakup.  The pain, fear and anger that accompany divorce are the grist for our mediation process and, as we start the process, we often do now know how the process will be informed by those emotions.

It is unlikely that Sedaka was singing about how difficult it is to break up the marital homeostasis.  After all, we are now told that, while about 40% of first marriages end in divorce, some 60% of marriages are not resulting in divorce.  The factors that bind a couple in marriage are powerful and, whether they are emotional, cultural, historical or financial binding factors, they are hard to unlock.

When a relationship does unexpectedly (at least for one spouse) swerve into the marital breakdown lane, I always wonder “Why?”  My curiosity is not statistically driven—I simply want to know their stories.  However, I just don’t ask. One reason I do not ask “why” is because I do not think the question is likely to elicit information that will contribute to the resolution.  More importantly, it is recognition of the boundary that guards and respects clients’ privacy.  Divorce is a dis-empowering experience and trusting clients to determine what parts of their stories to share in mediation restores to them an important power.  If mediation is a process that belongs to the parties, sharing with me the reasons for divorce ought to be their decision.

Of course, parties will occasionally invite me to cross the boundary by disclosing information about “why” they are breaking up.  It is my experience that the parties find a way to tell us what we need to know to complete the tasks of mediation.  Often the “Let’s tell the mediator” version is a sanitized reprise of their own history.  One of the gifts of mediation is the provision of a place and a context for the parties to share their more authentic and meaningful stories with us and with each other. 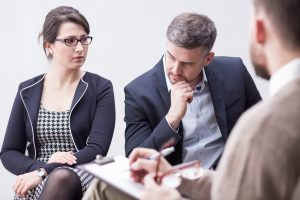 Ted and Sally presented as a fairly congenial couple living together in their home, which was for sale, and Sally was leading the charge to divorce.  Sally was the designated historian and choreographer.  They had prepared their presentation carefully.  “Of course,” they assured me, “We chose mediation because of our children.”  Tim was 12 and Sara was 7.  I listened attentively.  I respected the efforts that went into their presentation and my responsibility to be a good audience.

Once Sally had run out of words, I started asking my usual questions:  “What are your thoughts about when Tim and Sara will be with Mom and when they will be with Dad?”  Neither responded.  Sally stared at Ted during the long silence.

Sally turned to me and said, “Look, I think I need to tell you that Ted is an alcoholic and he is still drinking.”  Ted mildly protested that he had not had a beer in almost two weeks.  Sally gave Ted another hard stare and continued to explain that she did not trust the children to be in a vehicle with Ted and, generally, was concerned about the children being alone with him.

While Ted and Sally lived together, Sally compensated for Ted’s lack of sobriety by transporting the children and carefully watching out for them.  But the parties’ separation would require Ted to deal with these issues himself.

It has been my experience that many of those who stand in Ted’s shoes, with their future relationship with their children at significant risk, find their way to detox programs and AA.  Sobriety is, in the context of the divorce resolution, often a shared goal.  Ted’s sobriety was certainly Sally’s goal, but Ted was defiantly indifferent. Ted explained very quietly that he had no plans to detox or attend AA.  Sally did not say a word.

The parties negotiated the terms of Ted’s parenting access: no transporting of children, visits would be with both children and Tim would have his phone, and Sally would have the right to cancel a visit if she believed in good faith that Ted was using alcohol.  The financial issues resolved in a fairly straightforward manner.

As we approached the end of the process, Ted’s cooperation waned.  Anger leaked out as Ted pushed back against “the restrictive parenting deal.”  Sally became the subject of his ire.  I listened passively believing that they were experiencing the typical “end of mediation is near” thunderstorm.

We agreed that we would have a final meeting.  I expected that Ted would have cooled down and that we would concentrate on the administrative steps necessary to complete the divorce.  As the session began, I sensed a huge cloud over the parties’ heads.  My cheery “How are you doing?” went ignored.  Ted said very quietly that he was not signing the Separation Agreement.  Sally’s distress matched Ted’s calmness.

“What do you mean?” she exploded.

“You know what I mean.  We have been talking about it for 13 years.”

Sally looked at me and said, “No Ted.”

“I told you before, Sally, and I’m telling you again that we do not have a deal and I am not doing this divorce until their ashes are buried.”

As I heard the word “buried”, I wondered if I had fallen asleep in a prior session.  Buried?  When in doubt, simply listen.  And listen I did, as I watched tears slide down their cheeks.

Ted must have sensed my confusion.  Between sobs, he explained to me that in their first year of marriage their twins were stillborn.  After a long and tearful pause, he told me that he and Sally could never agree to bury the ashes of their cremated children.  Ted shared their names with me.

Their ashes had been placed on a shelf in a closet along with various items of clothing for the children that were never worn.  Sally could never bear to bury the ashes.  “I need to be able to take them out of the closet and feel that they are with me” explained Sally. 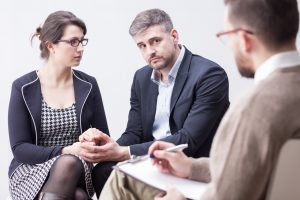 “But Sally,” Ted whispered, “I need to say goodbye, and you do, too.  We could never move on and we will never be able to unless we bury the ashes.”  We proceeded to negotiate where and how the ashes would be buried.  The cloud lifted.

I wondered if the sadness of divorce had evoked the grief that had held their marriage hostage for so long.  I thought about the irony of how they had achieved closeness, even intimacy, in divorce.  I didn’t say a word.  They had their own truths and emotions resonating through their hearts and heads.  I had no confidence that my words would add anything.

The only thing I could think to say was “Go in Peace.”  I said it and that’s how it ended.

Bruce D. Clarkin is a principal in Divorce Mediation Group in Springfield and Northampton, MA.  He has mediated approximately 1800 divorces since 1990.  Bruce is an attorney and has a Master’s Degree in Marriage and Family Therapy.  He can be reached at [email protected]p.com.

This article was originally published in the Spring 2013 issue of The Professional Family Mediator.