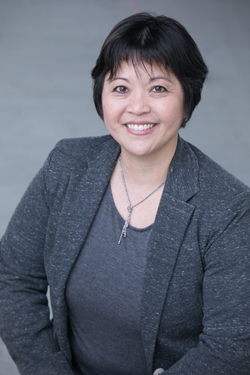 1) Who are you? Where do you come from? What is your background?

I grew up in the deep south in Louisiana. I had a love of theatre from very early on, so I started acting at age 13 and eventually ended up getting a BFA in acting from Miami University in Ohio. I finished my degree in Czechoslovakia. While I was there, the country split, and I lived in the Czech Republic. I started directing and continued my directing education at the University of Hawaii. I was an artistic director for a small theatre company in San Francisco for a few years in the early 2000s. At the same time, I worked as a graphic designer for about 15 years.

2) What do your current professional practice and activities look like?

I practice divorce mediation, family conflict mediation, as well as probate, conservatorship, breach of contract and workplace mediations. I belong to several networking groups as well as Boards. I am the VP of the Peninsula Conflict Resolution Center, the Vice President of the Professional Women’s Networking group, the President of my BNI networking chapter (through September 2021), and the President of the Alameda County Bar Association’s ADR Executive Committee. I am also a volunteer mediator for the day-of-court program in Alameda county, and a volunteer arbitrator for the San Francisco Bar Association and the San Mateo Bar Association. I am a volunteer Conflict Transformation instructor at the Redwood City Jail in California. I am also a volunteer facilitator for small civic conversations in cities along the San Francisco Bay Peninsula Area. I am a panel mediator for the Conflict Intervention Services and mediate between low-income tenants and property management in San Francisco.

3) How did you first learn about mediation?

I began mediating in 2013 with an au pair agency I work for. I mediated between au pairs and host families when they had conflicts within their relationships. I was very nervous the first few times I had to mediate in a host family’s home. I did not have any training and just did my best. I learned quickly that I enjoyed it, and once I learned that I was good at it, I was hooked! In 2016, I got certified as a mediator and started my practice.

4) What do you hope to accomplish as a Board Member of APFM?

I hope to be able to influence the field of mediation, so that we can improve the racial diversity of mediators nationally, as well as influence the conversation revolving around attorney-mediators vs. non-attorney mediators. As a non-attorney mediator, I frequently come across bias from attorneys, since many still want to work only with attorney-mediators. I would like to see this change, over time.

5) Where do you see the field of Family Mediation going?

I see that more and more people will be using mediation instead of going through the court system. The courts are already backed up, so resolution through mediation will be much quicker and, since both parties have agreed to something together, the chances of them following through is much greater.

6) What do you like to do when you are not mediating?

I enjoy traveling. I try to take smaller trips throughout the year. I like to take one big international trip with my kids each year. I enjoy hiking on the weekends, biking, and bingeing on Netflix shows. I love hanging out with my kids on the weekends, as they are in school and videogaming with friends during the week.