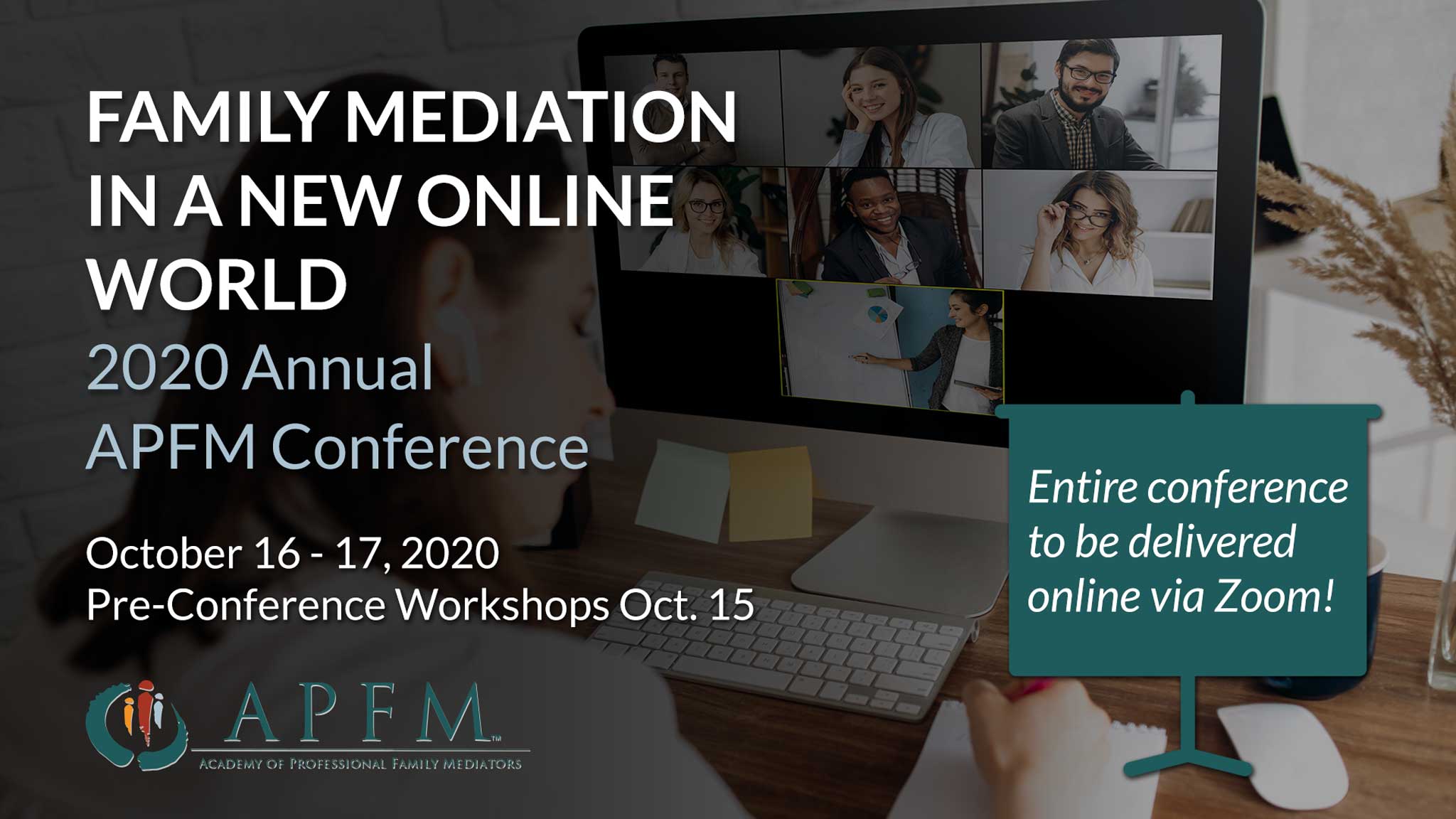 Below please find recordings of the October 16-17 Conference, which have been uploaded to APFM’s Vimeo account.

If you do not see the videos below you may need to refresh your browser or try a different browser.

As a conference registrant, you are entitled to view the recordings for free. Use the code “APFM2020” (case sensitive) at Vimeo to avoid payment.

Links to materials are provided when presenters made those available to APFM.

This program will explore the ideal path for the continued growth of the family mediation field in relation to online mediation services. We will assess the present state of our profession and explore the trajectory of our future. Specifically, the program will address opportunities and obstacles related to offering family mediation services online. Practical and ethical issues related to online mediation will be addressed. New technologies, marketing strategies, and maintaining an efficient and successful mediation practice will also be explored.

The financial benefits, though important, pale in comparison to the joy and rejuvenation I feel towards practicing… Although I am over sixty years old, I get up in the morning ready to run to the office. I cannot imagine retiring…

This panel will explore strategies for building a successful career as a full-time peacemaker. We will explore some oft-overlooked opportunities for networking and marketing your family mediatoin practice.

A2: Implicit Bias: When Peacemakers Take Sides, the Power Shifts

Our presentation will educate the participants about implicit bias and white privilege and how both perpetuate social constructs of racism in our society and harms all of us. Participants will learn about the different types of privilege and be absorbed and internalized by all to maintain and justify institutionalized racism.

Mediators are ethically required to be neutral, but we bring our biases and prejudices into the negotiation session. Our presenters will teach strategies to recognize your preferences, neutralize their impact when triggered in session, and how and when to engage in “critical conversations” about race, gender identity, and disability to preserve essential mediation principles of fairness and neutrality and equal bargaining power in practice.

This program will cover not only the technology that is essential to effectively and properly conduct your mediations online, but will also go beyond those fundamentals to include the additional programs, technology and more that can help you to optimize your practice in a rapidly changing and advancing virtual world. The program will include a peek at some of the exciting new technology in the pipeline as well as time for Q&A with our expert panel to help you help you create a competitive advantage for your practice and make your clients love you even more!

This workshop will present important and innovative issues to include in every pre-marital and post-marital mediation. We will not only discuss the standard issues that need to be included, but also some new ways of thinking about the purpose and function of a pre-marital or post-marital agreement.

How Online Dispute Resolution is Changing and Evolving Family Mediation:
– what ODR is
– how it works
– examples from family mediation
– new frontiers in using technology to help parties

This presentation will be a panel discussion on the international perspectives, strategies and techniques used in family and divorce mediation and how we can learn from other countries and professionals.

We will be focusing on the growing area of “pet ownership” disputes in the family law context. Pet-related disputes frequently arise between separating or divorcing partners, but there is little law on the issue and the subject has not traditionally been addressed in mediation training/education programs. It is therefor important to provide new and veteran mediators alike with a forum to consider ways to address and resolve such issues when presented

Covid-19 has resulted in an increase in abuse and violence towards intimate partners and their children. At the same time, access to courts has been restricted. For those who are separating and also experiencing domestic violence, family mediation can be a safe way out. But careful and informed screening to identify, assess and manage risk is critical. This panel will explore the latest tools, protocols, best practices and more in the US and in Canada.

We will be discussing considerations for marketing an online mediation practice. While many strategies and best practices used in marketing a conventional practice are still relevant, online mediation presents new benefits to potential clients and opportunities for professionals. This panel of marketing savvy mediators will discuss what has worked for them in this transitional time for the field.

This panel discussion will discuss in depth the financial issues of divorce that are often overlooked, misinterpreted, ill advised, and essential to fully informed and successful settlements. If you’re not covering these topics with your clients, you’re doing them a great disservice. Join us to explore how you can better serve your clients by knowing the financial topics to bring up.

This panel of three experts and a Moderator will address some background on high conflict personalities and personality disorders, including four areas of difference in how to deal with them compared to ordinary mediation: not trying to give them insight into their own behavior; not emphasizing the past but rather what they can do now and in the future; avoiding emotional confrontations; and avoiding labeling them “high conflict personalities” or having personality disorders. Instead, emphasizing that the parties think about their agenda items and think about their proposals during the mediation process.

Panelists will address adaptations to the mediation process for these personalities, as well as adaptations for online mediation, including: screening for domestic violence, use of breakout rooms for separate discussions with each party, and explaining to the parties generally how the courts might handle a case since they are backed up by many months before getting in for a hearing. Other adaptations will be discussed by the experienced mediators on the panel.

During this presentation I intend to use a Q/A format to ask the panelist to share their experiences and techniques used to build trust between themselves and their clients and to rebuild trust between the clients themselves throughout the mediation process. We will then explore if/how these techniques have changed given the move to virtual practice most of experienced rather abruptly due to COVID 19. I intend to leave some time for Q/A from the folks watching live.

It was the early divorce mediators leaders who first discussed changing the language of child custody in divorce – that was in 1979 at a training at The Mountain, North Carolina with Jim Coogler. It was then we decided that we needed to work with parents to decide how they would each be parents to their children after divorce and no longer frame this as who gets custody and who is a visitor. But there were challenges early on, one of the most interesting (and laughable) was in 1981 at a training in Chicago with Steve Erickson, Ginger Stafford and John Haynes when I was talking about parenting the children after divorce when a Psychologist criticized the use of the word, because “parent” was a noun, not a verb – but it had already become a verb thanks to the early family mediators. The next challenges came from lawyers and courts which preferred the divisive language, which generated conflict not cooperation between parents. This challenge to mediators was to find a way for our client’s choices to be accepted by courts. Instead of just taking the custody out of divorce, we family mediators took the lead in offering parenting plans in divorce mediation, and parents began to design their own plans for the future parenting of their children. So the early ethical challenges to parenting plans came not from mediation, but from the courts. But in the long term, family mediators have prevailed in changing the mindsets of divorcing parents to plan for their parenting continue for a lifetime, not just their marriage.

This presentation takes parenting plans to the next level, that of the fine line family mediators walk when working with parents. Each set of parents is unique and each parent has different values and ideas about parenting and how to make it work in the future. We mediators get into the thick of their discussions in building their parenting plans in mediation, and the challenges are ever present.

Each person on our panel will describe three or four such ethical challenges in mediating parenting plans, and the interventions used.

Closing Plenary: The Coming of Age of “Strategic Mediation”: Is it Becoming Mainstream?

In this closing plenary, through a lively, expansive, and deep-diving discussion, we will explore the “Strategic” approach to mediation and will consider whether it has now become a mainstream model, along with the more traditional Facilitative, Evaluative, and Transformative models.

After first presenting a brief synopsis of the current mainstream models, the original concept of the strategic approach to mediation, first published in the early 1980s, will be detailed and followed by empirical research that goes beyond models of mediation into modes of mediation and suggests a radically new way to conceptualize our research and work in mediation . This will be followed by examples of technique enhancements and innovations to the original concept of Strategic Mediation.

Videos from the Conference 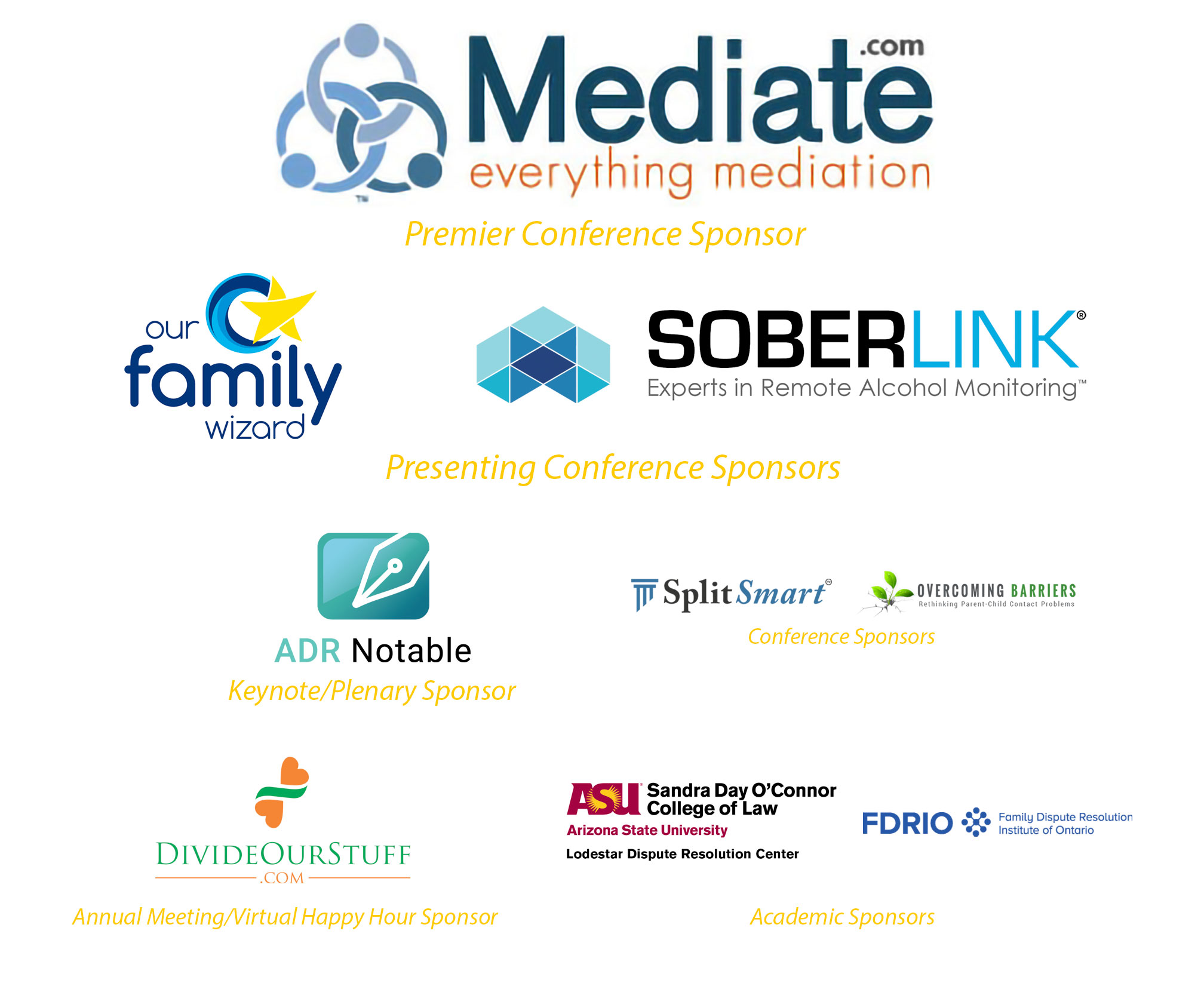